Even today, there are people who are reluctant to drive over Dartmoor, preferring the dual carriageways and main roads around the edges to the wide open spaces, possible mist and unexpected livestock appearances on the high moor.  Imagine what such a journey would have been like in the 15th century:  muddy winding tracks which frequently either petered out or divided, no signposts, few habitations, no shelter for miles and the risk of encountering others who might take advantage of an unseasoned traveller…

It’s not surprising that only those who really had to travelled through the centre of Dartmoor in those days.  Medieval tracks linked important sites such as towns, castles or abbeys and were used by those who had business to conduct.  Other routes were used by farmers taking livestock up onto the moor, tinners prospecting up river valleys and delivering  their ingots to the nearest stannary town,  peatcutters heading out to the high moors, or jobbers collecting wool from moorland farms and bringing it down for spinning and weaving in the lowlands.    These routes form the basis of today’s network of lanes and footpaths.  On many of them you can sense how old they are, sunken deep into the land with gnarled hedgerows or perhaps a moss-covered wayside cross alongside.

Having experienced how much it brings a Dartmoor walk alive to understand the origins of the path one is following, I decided to organise a trans-Dartmoor walk following an old packhorse track that leads from Tavistock to Ashburton.   Up until the end of the 18thcentury, trains of packhorses were the main users of roads and lanes, and all goods were transported this way:  Dartmoor ponies were much valued for their sure-footed stamina, carrying up to 400 pounds weight in panniers and crooks.   I chose the T-A track because of the variety of scenery it passes through, the number of crosses and stones that still mark its route and the fact that there’s a convenient stopping place in the middle (Princetown).

We start the walk in Ashburton and take some quiet tracks and lanes to the Country Park, beyond which the old track climbs up to Galant Le Bower, winding through lovely woods and meadows with the wooded Dart valley appearing below.  A bit more lane walking takes us to the pretty village of Holne and out the other end to the open moor.  Here the track is also the old miners’ route to Ringleshutes mine.  We follow it for about a mile then head across above the reservoir (which of course didn’t exist in packhorse days!) and over to Horn’s Cross.  Rejoining the lane at Saddle Bridge (note the horse-related name) we walk past Hexworthy and into the Swincombe valley with its crumbling ruins which once served as watering and overnight stopping point for the packhorses.   Then an easy high moorland walk takes us past the Crock of Gold and along a track created 100 years ago by conscientious objectors imprisoned on Dartmoor, which brings us into Princetown.  Day one is 13 miles.

Day two is a shorter walk of just 8 miles, mostly downhill, so we will take our time and explore the interesting areas we pass through.  We start by following the T-A stones around the side of North Hessary Tor and down to Yellowmeade Farm.  We’ll explore the area around Foggintor Quarry before heading over to Merrivale with its magnificent Bronze Age stone rows, burial sites and standing stone.  We cross the Walkham river and follow the old leat across Whitchurch Common and past wonderful Windypost Cross and the famous Bullseye Stone.   The tracks descends gradually to Moortown where it becomes a quiet lane, and then we follow a series of crosses across open land and a golf course, before descending Green Lane into Tavistock.  We’ll probably have about an hour to drink tea or wander around the lovely market town of Tavistock, before taxis pick us up at 3 pm

The cost of this walk is £60 which includes transportation from Tavistock to Ashburton and an overnight stay in the Fox Tor Bunkhouse but not food.   I can also transport bedding and overnight stuff to the bunkhouse on the day before to save carrying sleeping bags etc. (bedding can be rented from the bunkhouse).  There are places to leave a car overnight in Ashburton.  Email [email protected] to book a place or to find out more.  It’s possible to join for just one day for £20, but that will require some transport planning!

END_OF_DOCUMENT_TOKEN_TO_BE_REPLACED 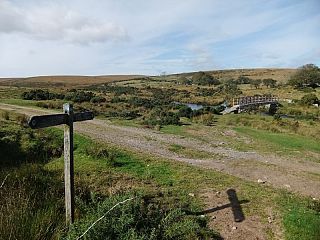 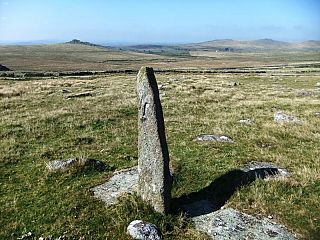 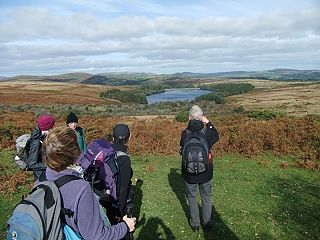