Wet, grey winters such as this can be a long haul for those that value time outdoors – one longs for bright crisp frosty days instead of perpetual cloud.  But there are some consolations that this season brings even when it’s overcast, such as the beauty of the leafless trees.  The knotted tangle of oak branches in the copses and woods, the graceful lattice of beech and slender silver trunks of birch are all a delight, but perhaps the most wonderful are the solitary hawthorns.  Primarily hedgerow trees in many parts of the country, on Dartmoor they are often found all on their own in the middle of the windswept moor.  The contorted shapes they form in this extreme environment never cease to impress (and will tell you the direction of the prevailing wind!)  Often they are dripping with lichen which waves delicately amongst the remaining haws.   I can never resist the urge to photograph these brave little specimens – a selection can be viewed here.

Traditionally known as the May tree, hawthorns have long been an important part of our folklore, even though they are neither particularly big nor long-lived.  Isolated specimens are mentioned in Anglo-Saxon boundary charters more than any other tree and the leaves are one of the models for the foliage which wreathes the faces of Green Men.   The hawthorn is the symbol of May Day and the source of the Maypole.  Its blossom is the very emblem of spring.  Superstition says the flowers should not be brought inside the house.  Many reasons are advanced for this ban, such as that this is a “papist” tradition and could get you into trouble in Puritan times, or that the flowers formed the wreaths worn by human sacrifices during Celtic spring fertility rituals.  Most likely it is because of the triethylamine in the flower, which is one of the first chemicals produced when living tissue starts to decay.  The slightly fishy smell therefore has an association with death and corpses which people in those days would have been well aware of and not wished to have in their homes.

When the big enclosure movement of the 18th and early 19th century took place, hawthorn was widely used to create sturdy, stockproof boundaries.  These hedges became larders for birds in the autumn and winter: great flocks of fieldfares can be seen feasting on them in the enclosed Dartmoor valleys.  These birds then fly further afield, and their droppings are the source of the isolated hawthorn that dot the moor.

Hawthorn is notoriously erratic in its flowering date, greatly influenced by late winter and spring temperatures as well as by altitude, soil and shade.  In the past century or two, it has been known to flower mainly in mid-May – too late for Mayday celebrations.  So why the association with early May festivities?  This can be explained by the fact that our calendar was revised in 1752, removing 11 days so that what had previously been 1 May became 12 May in the modern (Gregorian) calendar.  With climate change bringing ever warmer winters and springs, it is now not uncommon for hawthorn to flower around the beginning of May in the lowlands, but on Dartmoor they usually take a lot longer.  This picture of flowering hawthorn and bluebells was taken on 30 May 2014, when we’d had a very cold spring.  Let’s see what this year brings….

To take part in a guided walk that visits moors, woods and other beauty spots on Dartmoor, sign up to the newsletter or send an enquiry to [email protected]

END_OF_DOCUMENT_TOKEN_TO_BE_REPLACED 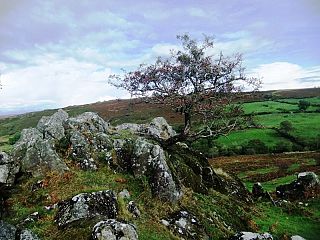 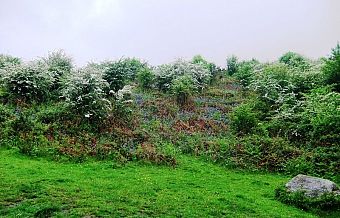