Today the global climate negotiations begin.  Yesterday was the global day of action.  There were many marches around the country but only one on Dartmoor, so of course that’s where I went.  And it was rather special.  How could it not be, when it took place on Crockern Tor in the wild and windswept heart of the moor?

The original plan for the Shared Planet Parliament had been for groups to walk (or cycle or ride) from different corners of the moor and meet at Crockern Tor, site of the Stannary (tinminers) Parliament many centuries ago.  I’d been asked to lead the 12 mile walk from Ashburton which would have followed the old packhorse track for about 9 miles, then headed off to Prince Hall and alongside the Muddilake enclosure to Two Bridges.  But the severe weather warnings came thick and fast – heavy rain and very high winds right in our face all the way.  With heavy hearts we decided that although experienced walkers with good kit could face such a challenge, a mixed group with children and less seasoned moor walkers would struggle.  So it was agreed that people would make their own way to Two Bridges and from there we’d all walk together to Crockern Tor, a much shorter but still very exposed walk.

Star of the show was Paula the Polar, a wonderful life-size model made by some pupils at Sands School who were also on hand to transport her.  As we gathered in the car park, we realised that lots of people had braved the gales to join the event.  One had cycled all the way from Bideford.  A family had walked from near Vixen Tor with a banner, sailing along with the wind behind them (it still took them 3 hours).   We did indeed have people from all corners of Dartmoor.   Paula was towed in her trailer along the road as far as the gate to Crockern Tor, with the rest of us behind in a splendid raggle-taggle procession.  Then she was lifted onto the shoulders of her teenage creators and carried carefully up the hill.

At the top, below Parliament Rock, we gathered to affirm our commitment to the future of this beautiful planet.  There were songs, prayers and the names of recently extinct species were called into the wind.  It was spine-tingling to think that probably the last time such a large group met in that place to reflect together on serious matters  was in 1730, the last session of the Stannary Parliament.   The first recorded was in 1494.  The Warden of the Stannaries would summon the 96 representatives from the 4 stannaries (Ashburton, Plympton, Tavistock and Chagford) to set out the customs and regulations governing their work and hear any grievances.  Crockern Tor is where the boundaries of the stannaries met, and also the home of the pagan god Old Crockern, so it was a perfect place for such a gathering.

The tinners were quite literally a law unto themselves in those days, being exempt from the laws of the land that applied to anyone not engaged in tinmining.  Of course, their business was not what we’d now call environmentally friendly and ultimately this (and other tinner misbehaviour) led to national parliament removing their powers: the waste from their mining activities was washing down the rivers and silting up important harbours.  But the model of a group of people meeting to regulate their own activities and doing so in the heart of the environment they work in is an inspiring one nevertheless.

We descended out of the wind (the rain had miraculously held off) and reconvened in the music room of the Two Bridges hotel for more conversation, singing and storytelling.  By a strange twist of fate, a UKIP convention was just finishing there, providing an interesting clash of cultures …. But then we do live on a Shared Planet.

NB  It is hoped to do another event in the spring or early summer when groups can undertake the walk/ride/cycle from all corners of the moor and meet for a celebration of our beautiful moor.  Watch this space.

END_OF_DOCUMENT_TOKEN_TO_BE_REPLACED 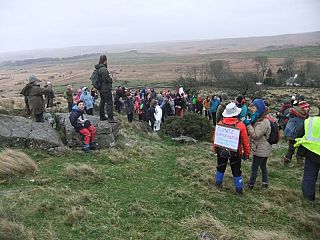 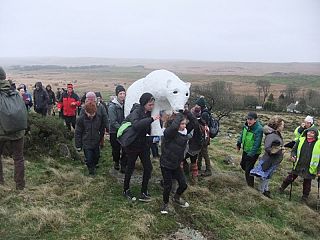 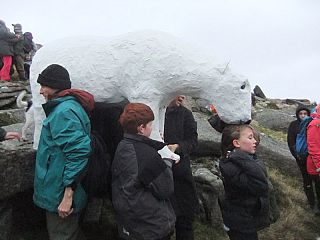