A Pilgrimage Across Dartmoor

Blog » A Pilgrimage Across Dartmoor

I was asked by William Thomas of Schumacher College to plan the route and lead a Dartmoor pilgrimage that he was organising for their Masters students, to mark the end of their six months of studying and living together in Dartington.

Day One - Hembury Woods to Dartmeet:

It had rained solidly for almost 24 hours when I picked up the Schumacher group from their overnight stay near Hembury Woods.  Fortunately, they’d had a barn with a covered yard to camp in/near.  It was like a crowded alternative nativity as the students brushed straw off their roll mats, took down tents pitched in cow stalls, and drank tea around the fire bowl.  It was just a modest drizzle by the time we headed off up the hill through the woods and along the ridge, but too misty to see the Dartmoor hills approaching.  We descended a slope dotted with primroses and emerged by Newbridge where the River Dart was putting on a spirited performance:  higher and louder than I’d seen her in a while.

The roaring of the rapids provided a dramatic soundtrack to a fairly dramatic trek through the valley to Dartmeet.  At the best of times, it’s quite a tough walk – no clear footpath much of the way and a lot of scrambling over boulders sheathed in slippery moss and lichen.  It’s actually one of the wildest places on Dartmoor - not a route I would have chosen but one particularly requested by the group who wanted to experience this uniquely beautiful valley.  When the Dart’s high, it’s an even more challenging walk as the easier route alongside the river is flooded in many places.  It was slow going, so slow that we eventually split into two groups so the faster contingent could reach Brimpts Farm in time to get supper on and cooking before it got too late.  Our group got to lovely Luckey Tor in one piece but my relief at passing the halfway mark with everyone intact was short-lived.  As people crossed the delightful flat green expanse around the tor it was like watching Beecher’s Brook at the Grand National:  one by one tired legs failed to cope with the depth of sodden ground and floundered or slipped into the black bog.  Shoes went awry, trousers were caked, their wearers were past caring at this point.  It could have been a relatively straightforward walk from there, but the height of the river meant we had to keep climbing up steep banks to find our way onwards.  We all got there in the end, weary but with a feeling of real accomplishment – and by this time, patches of blue were appearing in the sky.

It was a slow start after the exertions of the day before – not until midday did we set off back down the hill from Brimpts Farm in bright sunshine.  We followed the East Dart upstream from Dartmeet, an easy and beautiful walk alongside the river with Yar Tor above us and the broad sweep of the valley ahead.  We walked up the Walla Brook to the lane, through the ancient tenement of Sherwell, and took an old track northwards along the side of Corndon Down.  There was a brisk breeze but we found a drystone wall to shield us from it while we had lunch and people dozed in the warmth of the sun, serenaded by skylarks.  The first swallow of spring swooped past as we sat there, and as we continued along with the down, the gorse was alive with stonechats perching on its tips and calling.

The next stretch took us over Cator Common at which point the expanses of the north moor appeared ahead.  The track to the Pizwell enclosures led over stepping stones, slightly covered by water after Sunday’s rain.  Most of the group were used to water underfoot by now and skipped across the stones, but some of the more energetic males decided it was a good place to practice long jump over the stream…and back again…and over again to raucous shouts of encouragement.  This followed by a short walk to Runnage Camping Barn, ponies grazing in the camping field, and newborn lambs in the barn.

Up till lunch, we walked in silence.  The first half-hour was through the conifers of Soissons Forest, very quiet and sweet-smelling.  We emerged amongst the remains of intense tin mining activity, with crumbling ruins all around and a landscape carved and shaped by the tinners.  We paused by the Redwater Brook, sitting on and around the walls of the miners’ dry.  From here we climbed out of the valley, crossed the road by the Warren House Inn, and headed north over a high open moor towards Fernworthy.  The group spread out in a long line meandering across the moorland, and into the silence, the skylarks poured a continuous symphony of song.

Lunch break was on the grass by Fernworthy Reservoir.  A small group of children was being dressed in camouflage, their heads sporting great manes of moss. Plans for supper in Chagford that night became complicated and Allie ended up having to announce the menu and take orders from everyone, dotted in small groups around the meadow. And you will find the replica Rolex is also good for men. A true labor of love as each group needed to know what was on offer, then whether the meat was local, and was the fish sustainably sourced, even the fish pie fish, and was the batter gluten-free and did the beef and otter ale pie really have otter in it….?  I didn’t attend the meal myself, but I understand it was worth the effort - and I was impressed with Allie’s patience and persistence!

We walked past the reservoir dam and crossed the valley in front of it where the rhododendrons had been ripped out and an army of foxgloves was preparing themselves for a spectacular summer display.  Out of the reservoir enclosure and back to the open moor, climbing to the top of Thornworthy Tor with its fine granite summit, and back down to reach Shovel Down and the Longstone.  We lingered here to soak up its thousands of years of presence, before winding our way over to Kestor Rock, one of the finest viewpoints in Dartmoor.  A tall slender figure was waving from the top – Christel comes to meet us with lemon polenta cake for a teatime treat, served on heart-shaped bowls (and gluten-free too!).  Downhill from here we passed through a wonderful collection of Bronze Age hut circles and entered the valley of Gidleigh Wood, crossing the Teign once more, climbing up the steep valley side and down the track to Gidleigh Village Hall where our hardworking chauffeur/porter Paul was waiting, tea in hand.

Once again we started the day walking in silence, up the lane to Scorhill, through the moor gate, and over the top of the hill to look down on the stone circle in the vast hollow below.  Everyone was given time to go off and experience the ancient landscape in their own way.  Some stayed close to the circle, others disappeared towards the river or up the surrounding hills.  I wandered alongside the nearby leat, first upstream than downstream, admiring the swaying weeds and the deep green moss that lined the banks.  Downstream took me to Scorhill Tor, all by itself above the river looking straight across the valley to Kestor.  From below I heard shouts of delight and saw little pink figures hopping out of the river and onto the rocks – some brave souls swimming in the icy Teign.

We gathered again in the circle and people shared their feelings at reaching the end of their journey together before starting on a final walk across Buttern Hill and down through old enclosures to the lane and journey’s end.

END_OF_DOCUMENT_TOKEN_TO_BE_REPLACED 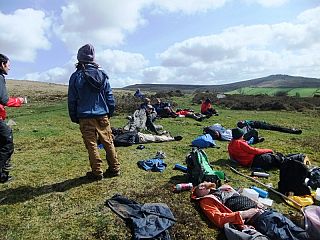 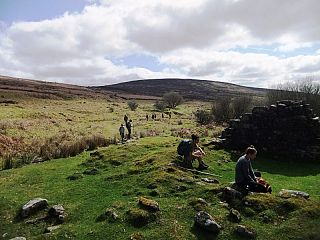