IT’S NOT JUST ABOUT AVOIDING GETTING LOST!

For many people, going on a guided walk means not having to worry about getting lost.  But there’s actually a lot more to it than that: even if you’re a great mapreader, you can’t know in advance whether you’ve picked a good route until you’re out there….

I’m often asked how I come up with ideas for walks.  Thinking about that question, I realise that it’s actually a process – in another industry I think it would be called product development.  First of all I have a set of criteria for what I’m looking for, then I decide on a possible solution (walk), then I go out and try it out, modify it as necessary and finally publicise the final product.

The attributes I’m looking for in a walk are:

·         Some great views and preferably at least one memorable tor

And these walks need to be in different parts of the moor as my customers may be staying in all directions.

Yesterday was a good example of "product development".  I had a route planned in an area I’ve never walked in before, so I set off with notebook and map to see how it worked in practice.  The first stage was up and over a tor with great views: a good start.  The path then led through a farm which sounded idyllic in the massive but rather old volume I consult on all things Dartmoor.  (I’m not going to name the farm, as if the owner is half as friendly as his dogs, I could be in trouble.) As I approached the buildings, past some piles of rusting corrugated iron and derelict farm machinery, a chorus of barks arose.  Some came from within a caged area, but two farm dogs were running loose with hackles raised and snarling.  And I hadn’t brought my stick.  I don’t know a lot about dogs but I know you must not show fear so I looked them right in the eye and spoke firmly.  It had some effect but only as long as I was making eye contact.  As soon as I turned around to continue walking, I had them snarling at my heels.  So I had to walk half backwards past the house, only to encounter a third dog outside the neighbouring house whose snarls were if anything even more alarming.  More eye contact, raised fingers and firm words.  It did work but my legs were wobbly by the time I got safely through, and by then I was clear that I could under no circumstances subject my walkers to such an ordeal.  The next farm along thankfully had no fierce dogs but the path was diverted around the farmyard up a lane that was a complete quagmire, even now when we’ve had barely any rain.  Much of the year it would be impassable.  Somehow I think neither of those farmers like walkers much!

So it was back to the map/drawing board.   I spotted another path which I could have accessed from the tor I started at.  I walked to the far end of it and worked my way backwards, down into one of the loveliest little wooded valleys imaginable.  The map showed the path climbing straight back out on the other side, but in fact you could walk alongside the stream past a series of waterfalls and pools with beautiful trees and ferns all around.  It was magic -- and I wouldn’t have found it if it hadn’t been for the incident with the dogs.  As I climbed out of the valley on the other side, I heard the canine chorus once again, and looking back saw a Royal Mail van making a hasty exit up the hill.  Poor postman having to deal with that every day!

The rest of the walk went as I’d planned except I made a couple of detours from the path to investigate some wonderful Bronze Age settlements.  These settlements are always shown on a map, but some are quite hard to spot on the ground.  These, however, were clear and extensive and it was incredibly atmospheric to wander amongst the hut circles in that huge valley.  That just left a river to cross with no bridge, but I found a part that was narrow enough for just about anyone to jump over with a helping hand.

The end result was a really excellent walk: very varied scenery, easy walking on the whole, many points of interest – and no fierce dogs.  That’s what you pay for on a guided walk

END_OF_DOCUMENT_TOKEN_TO_BE_REPLACED 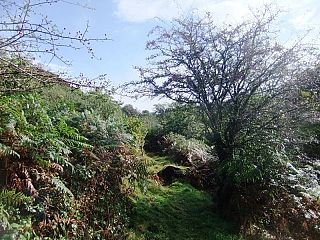 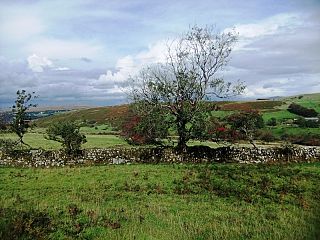 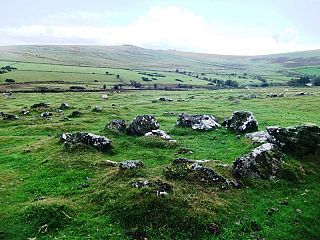