Always Something New to See...

Blog » Always Something New to See...

Heraclitus said you can never step into the same river twice, and I say you can never do the same walk twice – especially on Dartmoor.   It’s not just the ever-changing seasonal colours, plants and animal life, but the fact that the landscape is so rich that even after years of exploring it, there’s still more to see.

Take this morning’s walk, just a gentle stroll from Beltor Corner along Dr. Blackall’s Drive, down Aish Tor and beside the River Dart all the way to Spitchwick.  As we emerged from the walled track onto the open moor, in mid-conversation I spotted a hut circle on the right, a very impressive hut circle.  I have done that walk many times and every time must have walked past it without even noticing.  This time, we stood in the doorway and admired the spectacular surroundings.  One thing I love about the Bronze Age people is that they obviously really valued their views!

A little further on, as we descended towards the river, one of the group spotted what looked like an upturned jellyfish emerging from the peat.  Closer inspection of this extraordinary object rang a bell in my head.  Just the other day I’d had a newsletter from Devon Wildlife Trust mentioning some of the exotic fungi that have been reported on Dartmoor this year.  This one is called Devil’s Fingers (Clathrus archeri) and originally came from Australia/New Zealand, thought to have arrived in Europe in 1914 along with military supplies from that part of the world.  It was first reported in the UK in 1946 and has been gradually moving eastwards from western Cornwall.  The bright red tentacles grow out of a gelatinous egg-like base (which we also found an example of).  As they age, the tentacles give off a foul smell, like rotting flesh.  We got down on our knees to confirm this – phew!  The smell attracts flies which then spread the spores all around.  This strategy obviously works well as we found five more specimens as we headed down Aish Tor.

Despite the fact that it’s nearly December, there were still lots of leaves, particularly on the beech and birch trees growing by the river.  The combination of brown bracken and foliage, yellow birch leaves, red hawthorn berries and the lurid pink of Devil’s Fingers made for an unforgettably beautiful  autumn walk.

END_OF_DOCUMENT_TOKEN_TO_BE_REPLACED 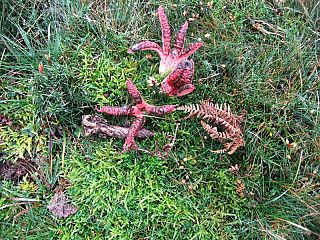 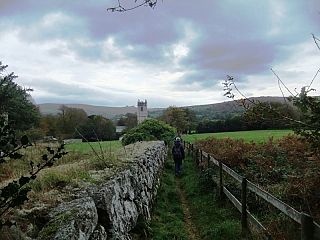